The missing link between us and the future

In the early 1990s, the IT industry got very excited about virtual reality, the idea that you could use some sort of headset display to wander around in a 3d computer-generated world. We quickly realised there are zillions of variations on this idea, and after the one that became current computer gaming (3d worlds on a 2d monitor) the biggest of the rest was augmented reality, where data and images could be superimposed on the field of view.

Now, we are seeing apps on phones and pads that claim to be augmented reality, showing where the nearest tube station is for example. To a point I guess they are, but only in as far as they can let you hold up a display in front of you and see images relevant to the location and direction. They hardly amount to a head up display, and fall a long way short of the kind of superimposition we’re been used to on sci-fi since Robocop or Terminator. It is clear that we really need a proper head-up display, one that doesn’t require you to take a gadget out and hold it up in front of you. 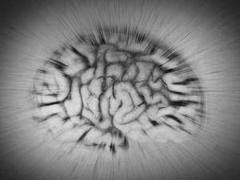 There are some head-up displays out there. Some make overlay displays in a small area of your field of view, often using small projectors and mirrors. Some use visors.  However the video visor based displays are opaque. They are fine for watching TV or playing games while seated, but not much use for wandering around.

This will change in the next 18 months – 2 years. Semi-transparent visors will begin to appear then. The few years after that will undoubtedly see rapid development of them, eventually bringing a full hi-res 3d overlay capability. And that will surely be a major disruptive technology. Just as we are getting used to various smart phones, pads, ebbook readers and 3d TVs, they could all be absorbed into a general purpose head up display that can be used for pretty much anything.

It is hard to overstate the potential of this kind of interface once it reaches good enough quality. It allows anything from TV, games, or the web, to be blended with any real world scene or activity. This will transform how we shop, work and socialise, how we design and use buildings, and even how we use art or display ourselves. Each of these examples could easily fill a book.  The whole of the world wide web was enabled by the convergence of just the computing and telecoms industries. The high quality video visor will enable convergence of the real world with the whole of the web, media, and virtual worlds, not just two industry sectors. Augmented reality will be a huge part of that, but even virtual reality and the zillions of variants can then start to be explored too.

In short, the semi-transparent video visor is the missing link. It is the biggest bottleneck now stopping the future arriving. Everything till we get that is a sideshow.