Interview with Alfred Lambremont Webre, Worldcach.com’s Leo Angesleva details how the “Obama” [read “U.S.”] Brain Project and the U.S. Army, along with other agencies covertly committed to the Transhumanist Agenda, are facilitating AI Artificial Intelligence reading and controlling all human brains and minds worldwide, and constructing Cyborg armies.

When brain implants arrive, will we still be “us”?

What happens when non-biological implants in our bodies — along the lines of cochlear implants to improve hearing in the deaf — include brain-related devices that might enhance our memories? Will we still be “us”? Will we be more of a cyborg than we were if, say, we had another type of implant? And for those who believe we would not be, at what point do we lose our selves to a more machine-like incarnation? When do we stop being human?

This is all pretty heavy, mind-bending stuff. But while such thoughts might seem like the domain of science fiction, when considering the trends toward smaller and more powerful computer chips and wearable computing, such theoretical musings might be relevant in innovation theory. And Ray Kurzweil, the often controversial author and futurist, has some opinions on this scenario in his new book How to Create a Human Mind: The Secret of Human Thought Revealed. (Andrew Nusca, SmartPlanet’s editor, recently reported on his talk at the Techonomy conference). Kurzweil argues that even without any non-biological implants, our physical selves are always changing. 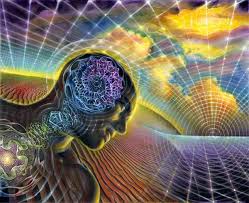 In a very short excerpt on Slate, he draws a simple and compelling (if not exactly parallel) comparison:

We naturally undergo a gradual replacement process. Most of our cells in our body are continually being replaced. (You just replaced 100 million of them in the course of reading the last sentence.) Cells in the inner lining of the small intestine turn over in about a week. The life span of white blood cells range from a few days to a few months, depending on the type. Neurons persist, but their organelles and their constituent molecules turn over within a month.  So you are completely replaced in a matter of months. Are you the same person you were a few months ago?

He argues that as our gadgets become smaller, they could eventually become part of our physical selves just as widely accepted health equipment, inserted into our bodies surgically, is today. Plus, he adds, we are increasingly “outsourcing” more of our information and even our memories — in terms of our precious photos, videos, recordings, and even thoughts, in terms of our writings and other materials — to the cloud, versus storing them in our brains.

It’s possible to clearly imagine such disparate trends emerge and converge in some way. But critics suggest that businesses might be wise to also consider the possible pitfalls of future internal, brain-enhancing machinery as they research and develop it. As Publishers Weekly wrote, in How to Create a Mind, Kurzweil can be “uncritically optimistic about the possibilities of our technologies.” Yet perhaps that’s the strength of his ideas: they can be seen as scene-building narratives that focus on a positive prediction of tomorrow. As Kirkus Reviews pointed out, Kurzweil’s new book can be understood as (italics mine) ”a fascinating exercise in futurology.” And, it seems clear, a conversation starter.