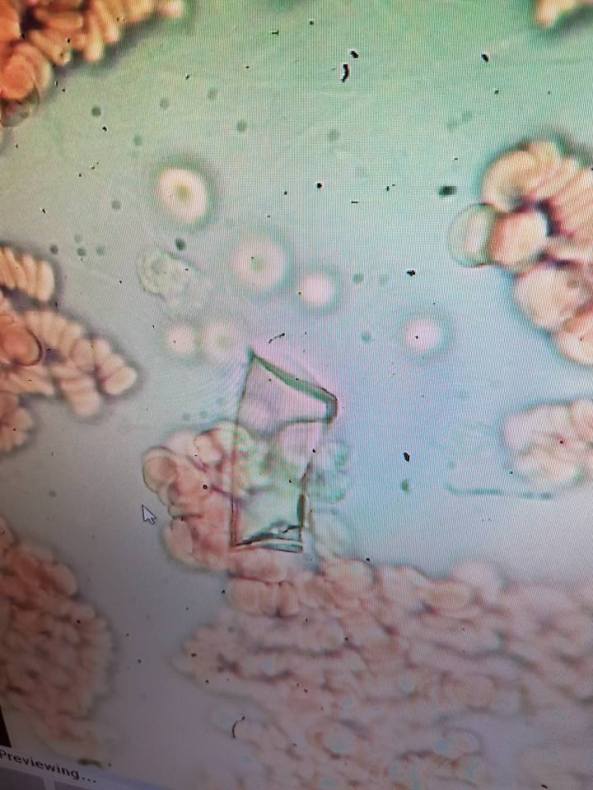 During my staying in Poland, in Lublin I met a specialist Dr, who took a sample of my blood from my finger and we watched this together through an atomic microscope.

I will not now describe what is wrong with my blood, but I want you to notice the cristal which was made artificially.

what this is doing to me:

and many other symptoms…

There are millions of this in my blood. Every victim should do this checking with a doctor who knows about People Online and will check this blood with you through a atomic microscope.

This, together with the waves  RF, ELF, SCALAR, NEUTRINOS, QUATUM SPECTRA, LASER, SONAR and others is devastating.

The most important for us is to secure ourselves and then cure. I am now working on a breathtaking solution for all of us, and I hope we will be free pretty soon. Then we can recover and heal.

Crimes against humanity are certain acts that are committed as part of a widespread or systematic attack directed against any civilian population or an identifiable part of a population:
https://en.m.wikipedia.org/wiki/Crimes_against_humanity
THE PENTAGON’S BLUE-SKY research arm wants to trick out troops’ brains, from the areas that regulate alertness and cognition to pain treatment and psychiatric well-being. And the scientists want to do it all from the outside in:
http://google.co.in/patents/US3951134

https://en.m.wikipedia.org/wiki/High_Frequency_Active_Auroral_Research_Program
What if a machine could read your mind?
https://drive.google.com/file/d/0B4iZUaEgNfFfMnpyem5fX1BPTTg/view
While most developmental robotics projects strongly interact with theories of animal and human development, the degrees of similarities and inspiration between identified biological mechanisms and their counterpart in robots, as well as the abstraction levels of modeling, may vary a lot. https://en.m.wikipedia.org/wiki/Neuron_(software)
While some projects aim at modeling precisely both the function and biological implementation (neural or morphological models), such as in neurorobotics www.humanbrainproject.eu, some other projects only focus on functional modeling of the mechanisms and constraints described above, and might for example reuse in their architectures techniques coming from applied mathematics or engineering fields.
https://en.m.wikipedia.org/wiki/Developmental_robotics

https://m.facebook.com/Artificial-Brain-Sweden-1014306015294202/
What are the ethical issues involved in simulating a human brain and in technology derived from human brain simulation?
Building computer models of the brain may challenge our concepts of personhood, free will and personal responsibility, and the nature of consciousness.
(Delgado stated that “brain transmitters can remain in a person’s head for life.
The energy to activate the brain transmitter is transmitted by way of radio frequencies.
https://en.m.wikipedia.org/wiki/Jos%C3%A9_Manuel_Rodriguez_Delgado)

https://drive.google.com/file/d/0B4iZUaEgNfFfZl9iU1BpbzNJTW8/view
In medicine, brain simulation could make it easier to communicate with people who cannot speak (e.g. people with severe disabilities, people in a vegetative state or with locked-in syndrome) or to enhance cognitive function in people with cognitive disabilities (e.g. dementia, trauma and stroke victims, etc.).
https://en.m.wikipedia.org/wiki/Wetware_(brain)
As in other fields of science, it also possible that new knowledge about the brain will be abused – deliberately, for example to create new weapons – but also involuntarily, because society does not realize the power and consequences of new technologies.
https://m.facebook.com/Martin-Ingvar-KI-1528410917453814/
For instance, it may be possible in the future to use knowledge about the brain to predict and modify individual behaviour, or even to irreversibly modify behaviour through electrical stimulation of the brain, pharmacology or neurosurgery. In cases of intractable mental disease, this may be desirable, but in other cases, the costs and benefits will be debatable. One example of debate is whether society should allow cognitive enhancement in healthy people.
Similar considerations apply to technology. Future computers that implement the same principles of computation and cognitive architectures as the brain have enormous potential to improve industrial productivity and offer new services to citizens.
However, they could also be used to implement new systems of mass surveillance and new weaponry.
https://m.youtube.com/watch?v=o9bd-B2dqCM&feature=youtu.be
If such systems came into widespread use they would undoubtedly have a huge impact on patterns of daily life and employment – this could be both beneficial and detrimental
https://www.humanbrainproject.eu/faq/ethics

This is what it’s all about:
https://m.youtube.com/watch?v=01hbkh4hXEk&feature=youtu.be
The development of your Future connected to a mindreading machine:
https://www.rt.com/usa/265029-kurzweil-google-hybrid-brain/

https://m.youtube.com/watch?feature=youtu.be&v=pW1HACMaOME
Imagine what U.S could do if they could master the nanoparticles that are distributed in vaccine to human’s worldwide and use them for remote neural monitoring:
https://mind-computer.com/2012/12/20/remote-neural-monitoring-a-technology-used-for-controlling-the-human-brain/
Nanoparticles BMI https://en.m.wikipedia.org/wiki/Brain%E2%80%93computer_interface in vaccine:
Nanofluids also have special acoustical properties and in ultrasonic fields display additional shear-wave reconversion of an incident compressional wave; the effect becomes more pronounced as concentration increases.
https://en.m.wikipedia.org/wiki/Vaccine

https://en.m.wikipedia.org/wiki/Nanofluid
This speaks volumes about the hidden impact certain vaccines may have on your body and your brain in particular…
http://articles.mercola.com/sites/articles/archive/2011/08/06/vaccine-increases-narcolepsy-by-660-percent.aspx

Delgado stated that “brain transmitters can remain in a person’s head for life.
The energy to activate the brain transmitter is transmitted by way of radio frequencies.
https://en.m.wikipedia.org/wiki/Jos%C3%A9_Manuel_Rodriguez_Delgado

http://www.raytheon.com/
In analysis such as computational fluid dynamics (CFD), nanofluids can be assumed to be single phase fluids.
http://www.datacenterdynamics.com/news/sgi-gives-us-military-the-fastest-supercomputer/91007.fullarticle
The Worldwide Security Grid: MATRIX Smartdust is a system of many tiny microelectromechanical systems (MEMS) such as sensors, robots, or other devices, that can detect, for example, light, temperature, vibration, magnetism, or chemicals. They are usually operated on a computer network wirelessly and are distributed over some area to perform tasks, usually sensing through radio-frequency identification.
http://www.foi.se/en/Customer–Partners/Projects/Edge1/Edge/
Without an antenna of much greater size the range of tiny smart dust communication devices is measured in a few millimeters and they may be vulnerable to electromagnetic disablement and destruction by microwave exposure.
https://en.m.wikipedia.org/wiki/Smartdust
The Grid Security Infrastructure (GSI), formerly called the Globus Security Infrastructure https://en.m.wikipedia.org/wiki/Grid_Security_Infrastructure, is a specification for secret, tamper-proof, delegatable communication between software in a grid computing environment. Secure, authenticatable communication is enabled using asymmetric encryption.
http://ieeexplore.ieee.org/xpl/login.jsp?reload=true&tp&arnumber=6028683&url=http%3A%2F%2Fieeexplore.ieee.org%2Fxpls%2Fabs_all.jsp%3Farnumber%3D6028683
In software engineering, the terms “front end” and “back end” are distinctions which refer to the separation of concerns between a presentation layer and a data access layer respectively.
The front end is an interface between the user and the back end. The front and back ends may be distributed amongst one or more systems.
In software architecture, there may be many layers between the hardware and end user. Each can be spoken of as having a front end and a back end. The front is an abstraction, simplifying the underlying component by providing a user-friendly interface.
https://en.m.wikipedia.org/wiki/Pervasive_game
In software design, for example, the model-view-controller architecture provides front and back ends for the database, the user and the data processing components. The separation of software systems into front and back ends simplifies development and separates maintenance. A rule of thumb is that the front (or “client”) side is any component manipulated by the user. The server-side (or “back end”) code resides on the server.
https://en.m.wikipedia.org/wiki/Front_and_back_ends

https://m.youtube.com/watch?v=o9bd-B2dqCM&feature=youtu.be
The Utah Data Center, also known as the Intelligence Community Comprehensive National Cybersecurity Initiative Data Center, is a data storage facility for the United States Intelligence Community that is designed to store data estimated to be on the order of exabytes or larger.
Its purpose is to support the Comprehensive National Cybersecurity Initiative (CNCI), though its precise mission is classified.
http://www.defense.gov/News/Speeches/Speech-View/Article/606635

https://m.facebook.com/Brain-Print-1585272778401091/
The National Security Agency (NSA) leads operations at the facility as the executive agent for the Director of National Intelligence.
It is located at Camp Williams near Bluffdale, Utah, between Utah Lake and Great Salt Lake and was completed in May 2014 at a cost of $1.5 billion.
https://en.m.wikipedia.org/wiki/Utah_Data_Center

In the computer software world, open source software concerns the creation of software, to wIntelligence.
https://en.m.wikipedia.org/wiki/List_of_artificial_intelligence_projects

hich access to the underlying source code is freely available.
This permits use, study, and modification without restriction.
In computer security, the debate is ongoing as to the relative merits of the full disclosure of security vulnerabilities, versus a security-by-obscurity approach.
There is a different (perhaps almost opposite) sense of transparency in human-computer interaction, whereby a system after change adheres to its previous external interface as much as possible while changing its internal behaviour.
That is, a change in a system is transparent to its users if the change is unnoticeable to them.
https://en.m.wikipedia.org/wiki/Transparency_(behavior)